Light-gauge metal and wood remain two of the most commonly used building materials to frame walls. Metal framing is cold formed to create long, thin sheets shaped through rollers into guided C or Z patterns capable of holding heavy loads. Wood is light and via stick framing speeds construction with no heavy tools or equipment. Both metal and wood framing have their benefits and drawbacks. What follows is a comparison between these two building materials.

David C. Dunbar, PE, national sales manager at Alpine TrusSteel, Orlando, Fla., says wood prices fluctuate weekly (i.e., random lengths) so he believes a comparison of wood studs versus cold-formed steel cee studs is quite variable. “It is my understanding that un-engineered wood studs and cee studs are comparable in price. With regards to engineered products such as wood versus proprietary cold-formed steel joists, wood is cheaper. Same applies to engineered trusses where wood trusses are half the cost, and conceivably less than half, the cost of cold-form steel trusses.”

Dunbar explains that many commercial projects specify cold-formed steel trusses at 48-inches on-center with metal b-deck sheathing, and that wood trusses are specified at 24-inches on-center with plywood sheathing. “The cost gap gets closed to some extent when evaluating the installed cost of the system,” he says. “Less trusses to install with cold-formed steel equals less labor. Less crane time equals less cost. Less time on the roof can equate to lower workman’s comp rates.”

Other cost aspects that are occasionally overlooked comparing these two can include insurance and safety expenses. Cold-formed steel is non-combustible. Because of this, Flood explains risk insurance tends to be lower on light-gauge steel projects and fewer safety requirements for fire prevention during framing are necessary.

Strength and Durability
Steel has a stronger strength-to-weight ratio than wood and even flexes with force—one reason for its success on large construction projects. Its ductile nature helps it withstand high winds, earthquakes and other stressors. Dunbar contends that while there is a perception that steel is stronger than wood, strength is really a function of design loads and both products are designed for the applied loads as needed. “Wood is generally stronger in compression due to it being a solid member versus rollformed light-gauge steel,” he adds. “In contrast, steel would be stronger in tension. Overall, steel has a stronger strength-to-weight ratio against heavier wood.”

Flood believes a very important focal comparison point is the “drastically higher part quality found with light-gauge steel: dimensional accuracy, dimensional consistency, straightness.” “These properties clearly distinguish light-gauge steel as a higher quality building product to both install and rely upon,” he adds. “As far as durability goes, light-gauge steel is impervious to the elements, bugs and mold. That certainly cannot be said of wood products.”

Steel is also dimensionally stable, meaning it won’t shrink, split, warp or crack; this helps prevent costly repairs and additional material purchasing. It will not require the frequent repairs and replacements that are common to wood components due to fire, rot, fungus, warping and infestations. Wood may require chemical termite treatments or pressure-treated lumber. Also, Dunbar says, “Steel does not weather and will not sustain mold and fungus, which creates an unsafe environment for occupants. Wood by nature is/was a living entity and can sustain and feed mold and fungus. Any termite or insect infestation is also neutralized by framing with cold-formed steel.”

Metal framing withstands earthquakes, high winds, heavy snow and hurricanes better than wood framing. In the event of a fire, light-gauge steel framing improves the amount of time available for egress prior to structural collapse. Light-gauge steel-framed structures are also safer for the firemen who are tasked with working a fire emergency in or near the structure. Flood explains that during flooding and partial submergence— typical in hurricanes—light-gauge steel framework can be fully preserved and reused in place. “The coverings may require replacement, but the framing most certainly does not.”

Construction Comparison
Wood and steel even differ in how they are transported to the job site. Light-gauge steel framing components are rainproof and impervious to the weather, so they can be transported uncovered and routinely stored outdoors because of their resistance to all types of weather.

Flood says whether they are individually bundled parts or prefabricated framework, covering requirements are a function of staying clean, not the weather. “The costs associated with wrapping shipments in plastic can be eliminated. Wood products warp when they have been sufficiently exposed to the elements—whether accidentally or intentionally. How many of us have seen a truckload of uncovered wood trusses rolling down the road in a rainstorm and thought, ‘I’m glad those aren’t for my house.’ Light-gauge steel framing components tend to be lighter than their wood counterparts; they are easier to unload, stage and handle than wood sticks.”

Dunbar believes cold-formed steel trusses weigh half of their wood counterparts and, “Trusses typically volume out before a truck Comparing two commonly used framing options would have excessive weight. When shipping great distances, say to Hawaii via freightliner, cold-formed steel due to its ability to be nested will have a greater amount of product in the same volumetric area.”

Due to the strength-to-weight ratio of cold-formed steel, Dunbar contends rafting trusses on the ground with decking attached is an optional way to install roof sections versus one at a time. “Wood trusses are difficult due to the heavier weight. I believe if you did an apple-to-apple comparison of the same building being framed in the same fashion, one with wood and one with cold-formed steel, each having an experienced crew, it would be a wash.”

Other Considerations
Light-gauge steel framing integrates with highly aesthetic welded structures efficiently, with the possibility of having other things welded to it. Wood framing requires more traditional fastening methods. Because metal components can be fabricated to specific lengths, architects have more freedom around wall height selection and building shape knowing that components can be made in highly specific ways without the risk of scrap and waste.

In terms of building usage and location, building codes dictate which types of materials are allowed for construction. Dunbar explains that typically, denser populated areas (where fire is of more concern) will steer material usage within the building to non-combustible construction.

Steel can be 100% recycled. “While trees/wood may be renewable, the rate at which renewable resources are available can be extremely limited,” Flood says. “The attempts to improve the engineering ratings of yellow pine represented a feeble effort to avoid the lack of availability of harder, older woods. Fabricating and processing light-gauge steel components produces very little scrap. Scrap rates under 2% are readily achievable because components can all be fabricated to project specific lengths. It is also far more efficient to move the raw material required to make light-gauge steel framing components to the point of fabrication. Wood has to be cut into bulk pieces for any kind of transport, whether to a building site or a processing facility. Scrap and waste stand as an inevitable byproduct of the form it naturally exists in. Steel on the other hand can be moved as a coil, then processed.” 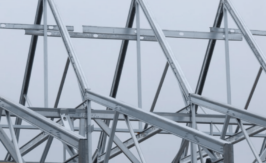 Read More
Back to News